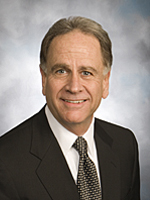 Steve established the Steve T. Matthews Company in 1982. For the past 10 years, Steve has focused on representing the Simon Property Group (SPG), the largest retail real estate investment trust in the country, throughout Central Texas and parts of the Southwestern United States. Steve has also served as an Attorney of Counsel with Barron, Adler, Clough & Oddo, LLP since 1987, a boutique firm specializing in Eminent Domain practice.

Beyond his professional commitments Steve serves on the Board of Directors for American Bank as well as being on the Board of Trustees for Marbridge Foundation and Executive Committee of the Capitol Area Council of the Boy Scouts of America. He has served as president of several Austin-based organizations including: Austin Commercial Real Estate Society, President of Rotary Club of Austin, Vice President of The Real Estate Council of Austin and President and Co-Founder of Keep Austin Beautiful.